We ordered breakfast to be delivered to our room this morning. they called us around 6:35 to see if we were ready for it. we were barely awake, but i told them to bring it anyway. Kandi and I ate on the balcony as we were nearing our dock. We arrived in port this morning around 7:30 am.  It's an industrial port but there are nice green areas to look at. 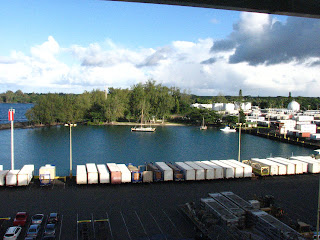 View from our balcony. 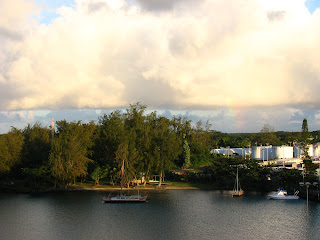 I scrapbooked for the morning then went in search for lunch at 11:45am. Some of the restaurants don't open until noon so I went to the Cadillac Diner and had lunch with Sherry and her sister as well as Lynne and Erin.
I had potato skins, mozzarella sticks and a hot dog followed by a brownie sundae. 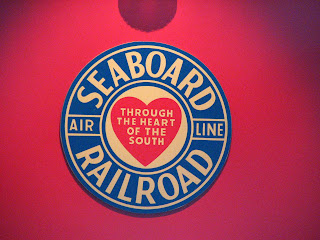 One of the signs in the Cadillac Diner.

After lunch I went back up to the scrapbook room and completed another page. About 4 I decided to go to our cabin for a rest. As I was walking there I ran into Kandi, Crystal and Trudy who just came back from the volcano park tour. They said tonight around 8 PM our boat should be passing by the area where the lava is flowing into the ocean. We should be able to see the red glow.

I have put on mascara and lipstick again and changed into my blue dress. I didn't plan it very well because neither of the two bras I brought are hidden by the dress. I am going braless tonight but wearing a camisole. You can't tell I'm not wearing a bra.  We had dinner with Bertha, Joan, lee-Anne, Lynne, Kandi and myself in the Skyline Restaurant.

We were late getting to the crop party. We had another crop challenge. Got more free stuff and crowned the Queen, Linda. Since the crowns Allison brought got damaged during the flight to Honolulu I made new ones out of a shaved ice cup and some stickers. We re-crowned Queen Jennifer S. with the new crown since she won on the land portion.
Posted by Jon & Michaelea Calon at 11:54 AM